The Renegades are a band that was born in a Southeastern Indiana town of Sunman, Indiana in the year 1994 but have been based in the Cincinnati, Ohio area playing music for years and have been blessed with great musicians throughout our time.  Biggin has held together a class act show and now has one of the greatest lineups the band has ever seen and heard. The band has been influenced by many artist in the business such as Mellencamp, Blackfoot, The Marshall Tucker Band, Lynyrd Skynyrd, Johnny Cash, Waylon Jennings, Merle, George Jones, B.B. King, all types of Blues and Southern Rock Legends. So anywhere from Soul to Bluegrass and from Rock and Roll to the greatest Country Legends. What can I say we play it all and we love the music . We play what the audience wants to hear.
"Biggin" Noble on lead vocals, trumpet and guitar, Steve "Bam Bam" Ludwig on vocals and drums, Randy Peak on Vocals, lead guitar, and harmonica and in the year 2015 the band welcomed back on bass guitar Mr. Russ Griffith who was one of the original founding members of the band with Biggin.  Added in in the fall of 2017 on "sax"  and flute is Mr. Steve Gulasy adding a new awesome sound to the group. Steve is a very seasoned professional player that you all will love.  This is a group of talented singers and players with great harmonies that have top quality musical talent.  Their live show is one of the best in the area and is being sought after by most venues some even nationwide. Come out and see for yourselves and be sure to come up and introduce yourself.  We love all our fans like family. You may even get a big sweaty down home hug from Biggin!
Sounds like a whole shit load of fun don't it? Come on out and hear for yourself. So if your looking for a band that has great harmony, great guitar work, and the strongest rhythm section around look no further.  When we're rockin' the stage for the fans it often results in a non stop performance. Who takes breaks these day?????? You won't be sorry.
Hope to see you all in a town near you.  God bless you all and all the men in women who serve in the armed forces to allow us to do what we do. 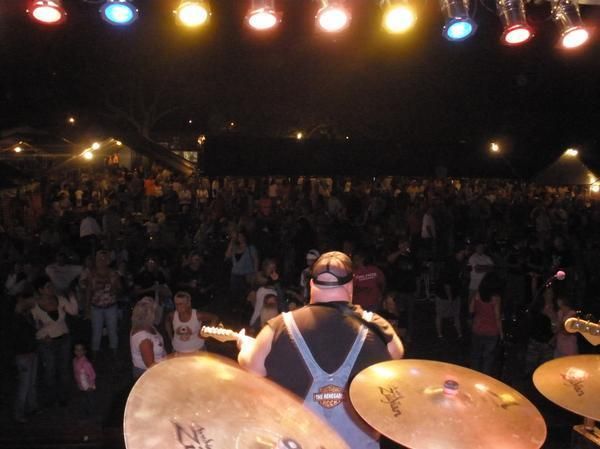